Too healthy, must add sugar.

With winter winding down, we wanted to make one more scrumptious, comforting apple dessert before the warm weather arrives. The result: Brandied Apple Cobbler Bars with Dulce de Leche Drizzle (recipe follows). Made with a buttery shortbread crust, fresh apples, and a generous amount of Calvados (apple brandy.)

And despite what you make think, we did not choose to create a dessert featuring brandy just so we could post a link to a Looking Glass video from the 70’s.

Luscious just watched that awesomeness 20 times in a row. Poor Brandy– dead-end job as a cocktail waitress and long-distance boyfriend with extreme commitment issues. Not, you know, that the Luscious girls, would, uh, have any experience with that sort of thing whatsoever. Ahem, let’s just move on to the bars. The apple cobbler bars that is, not the 2nd rate bars full of redneck alcoholics where Brandy worked.

Start with the dulce de leche— it takes a while but it’s easy. Don’t be tempted to use a can of ready-made dulce de leche, it will be too thick and we think it tastes a little weird anyway. Remove the label, and puncture or slightly open the lid. So it doesn’t explode, you know? Place the can in a small saucepan and add water to  about 7/8 the way up the sides. Simmer for about two hours, until thickened and light brown in color.

While the dulce is makin’, get going on the crust and streusel topping. Whisk together the flour, sugar, and cinnamon. Cut the butter into small pieces, and cut into the flour mixture with a pastry cutter or your fingers. You can also use a food processor, but don’t over mix:  it’s done when it looks like crumbs, it shouldn’t be smooth. Reserving about 2 cups for the topping, press the mixture into the bottom of the pan. Bake for 15-18 minutes until lightly browned. Let cool for a few minutes before topping with filling. 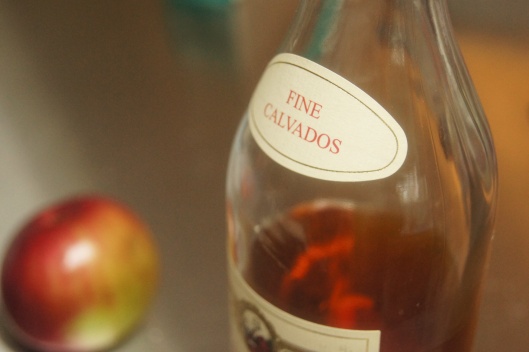 Now for the filling!

For the filling, melt butter in a large skillet over medium heat. Add the apple slices and toss to coat with the butter. Cover and cook for 5-7 minutes, until apples start to become tender. Remove lid and add raisins, sugar, cinnamon, and calvados. Cook until liquid is thick and syrupy, then pour mixture into a large mixing bowl. Let cool for a few minutes, then stir in flour, sour cream, and orange marmalade. 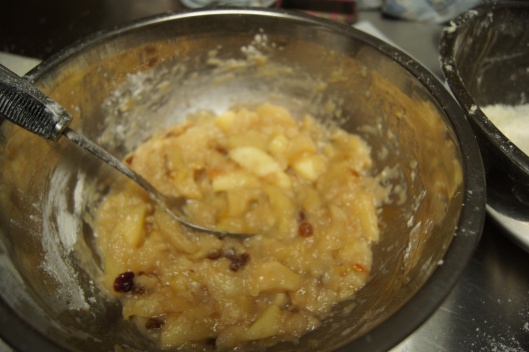 The cooked filling, ready to go into the crust.

Pour over crust and spread evenly, then top with the reserved streusel mixture. Bake into the oven for 35-40 minutes. Allow to cool for several minutes before drizzling with dulce de leche.

Now turn your attention back to the dulce de leche. Pour about 1/3 cup into a bowl, reserve the rest for another use. Stir in cinnamon and Calvados, then drizzle over the cooled pan of bars.

Allow bars to cool and firm up in the fridge for an hour or two. Cut into bars, and bring a few to somebody you want something from. 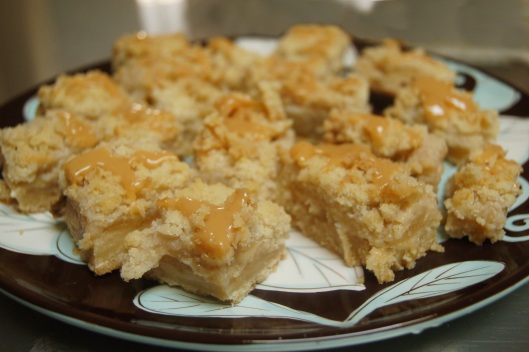