Those Luscious girls never argue with each other. For one thing, they get along really well, and for another, they’re  usually already worn out from arguing with their children and husbands. But the other day, they actually disagreed about what could be called a tart. Jennifer said that, technically speaking, tarts have a pastry crust, and Anne-Charlotte said she knew quite a few back in high school, including pretty much the whole drill team. Jennifer has to put up with a lot. 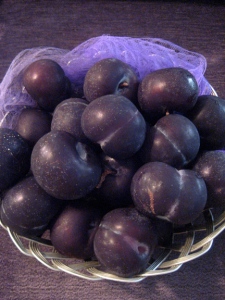 Tart talk at LPWH (Luscious Pastry World Headquarters) can only mean that a flurry of Lusciousness is on the horizon. Luscious will be back at  Violet Crown Supper Club this Thursday September 3rd, showcasing Indian Summer Plum Tarts (the pastry kind) with Mascarpone Cream, yeah baby. Plus some special brownies. No, no, no- not THAT kind of special brownies, Luscious doesn’t want to give customers an excuse to lay around on the living room floor listening to Dark Side of the Moon. These brownies are special as in they’re NOT those dry, crumbly kind of lame-ass brownies that are always letting people down. Jennifer’s whipping up some incredibly rich, moist, chocolately brownies, which are are the opposite of lame-ass, therefore let’s call them Jennifer’s Bad-ass Toffee’d Brownies. VCSC is expecting a crowd this week, so don’t be shy about asking us to set some tarts or brownies aside for you, we love pre-orders.

It seems like that would be enough for one week, but sometimes Luscious just can’t stop. Just around the corner we have the Labor Day weekend, during which hard work is celebrated by not doing any. Get in the spirit by lazing around in your pajamas all morning, and eating brunch treats somebody else cooked. Luscious is offering the following for Labor Day weekend:
– Baked Blueberry French Toast, $11 for an nice-sized pan
– Cherry Pecan and Chocolate Cherry Scones, $9 for a dozen petite scones
– Upside-Down Ham and Swiss Breakfast Tart, $12. Yes, this is the one that caused all the controversy and catty drill team comments. So maybe it’s really a casserole.  The class of ’89 drill team, on the other hand…

Place your Labor Day brunch order by Friday morning at apatterson@southerncombustion.com. Or do you need a Luscious dessert for a Labor Day get together? Just let us know, operators are standing by.

2 thoughts on “Are you a tart? Take this quiz to find out.”