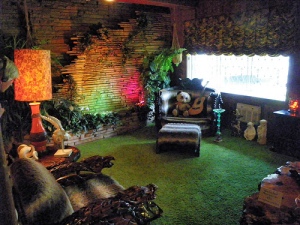 Luscious has something serious to talk to you about, dear friends. As we are sure you are well aware, this coming Sunday, August 16th marks the 32nd anniversary of the death of the King, Elvis Presley. You may think we’re kidding when we say we get a little misty-eyed this time of year, but no — we don’t kid around about Elvis.  Even though we were just tots when the tragedy occurred, we remember just exactly where we were when we found out Elvis had died ( driveway of Aunt Diane’s house, mid-afternoon, Garland, Texas). We remember the tasteful gilt-edged Elvis Presley salt-and-pepper-shakers we acquired on a pilgrimage to Graceland at the tender age of 21. We also remember the party where we nearly got in a fistfight with the art director of WIRED magazine because he dismissed Graceland as nothing but “kitsch”. Um, yeah Black-Turtleneck Boy, if YOU decorated the living room of your modernist San Francisco home with a wall fountain and animal prints and plastic greenery, it would be “kitschy” and you would also probably deserve an ass-whoopin’. But when Elvis did it, it wasFREAKING AWESOME.

Okay, sorry, we’re getting a little worked up here. Really, the point is, there’s only been one person on the planet who could  TCB-in-a-Flash by striking kung fu poses in a spangly, sparkly, bell-bottomed white jumpsuit and look very, very cool doing it, and that person is dead, y’all.

Well, we imagine you’re feeling a little sad now, too. All you can do is take a deep breath and say to yourself “WWED?”  That’s what Luscious does. And we’re pretty sure we know what he’d do.

Available this weekend only, Peanut Butter and Fried Banana Ice Cream. $5 a pint, place  your order at apatterson@southerncombustion.com.