“How was your day at school, sweetie?”
“Not too good. The band director threw my instrument down the hall.”
“What??? How is that even possible? She’s only 5’2” and you play the TUBA.
“Well, she threw it pretty far.”
“Oh dear lord. I guess I better make her some brownies.”

Parenting is hard, y’all.  If your offspring’s behavior/lack of musical talent enrages an instructor to the extent that a 70lb brass instrument becomes airborne, there are several things you could do. You could give your child a good talkin’-to. You could request a parent-teacher conference. At the very least, you could ask what the hell happened right before the tuba took flight, but you know what, the Luscious mamas don’t always want to be burdened with the details.  Some situations are more quickly settled with food bribery.

Here’s what transpires next. Luscious goes into a culinary commando damage control mode that would intimidate a Navy Seal. An extremely decadent brownie recipe is carefully concocted. It is executed with military precision (like, Anne-Charlotte actually measured everything). The delicious treats are delicately frosted and boxed up attractively, no… irresistibly.  The final strike is set for after school a few days later:

Motherfu…grrrrr! Why does everything have to be so freaking complicated?  How can Luscious manipulate you with baked goods if you insist on being vegan, band teacher lady? 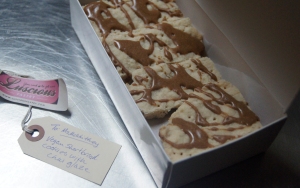 Fine, Luscious can deal. Time for Plan B. (Okay, actually Plan C, Plan B was “just give her the brownies say they’re vegan, gluten-free, cruelty-free, whatever she wants to hear” but unfortunately, the Luscious children prefer to tell the truth. It’s annoying.)  Even though the brownies were basically vegan if you didn’t count the butter, eggs, and cream, Luscious Pastry got back to the kitchen and got creative. The result: vegan shortbread cookies made with organic coconut oil and drizzled with a chai spice & almond milk glaze. And it is not easy to milk an almond, y’all.

Luscious has rabid butter loyalty, so this is really hard for us to say: These vegan cookies totally and awesomely rock. The kiddo said his band director was delighted to receive the cookies. She thought they were DELICIOUS! Heh heh heh, our plan is working…

The next week, after school on chair test day:
“How’d it go, honey?”
“Not good, mom. I’m still last chair.”

DAMN. Vegans are apparently quite principled, which is admirable yet irritating as fuck if you need to bribe one.  We’ll just have to try a little harder next time, Ms. Vegan Band Director… you can’t resist us forever. 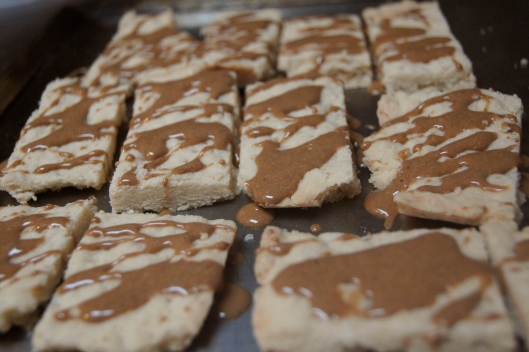 or (if, tragically, you have no Luscious Chai)

Using a handmixer, cream together coconut oil and sugar. Mix in salt. Sift flour over the coconut oil mixture and use your hands or a wooden spoon or both to blend together. Sprinkle with almond milk and continue kneading with hands until the dough is smooth. 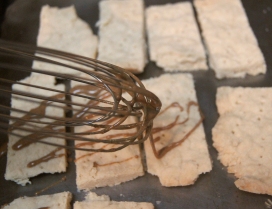 Press dough into pan in one even layer extending to the edges. Prick all over in a decorative fashion to prevent bubbling.  Bake for 25-30 minutes until lightly browned.

Allow to cool for a couple of minutes, then cut into bars while still warm. When cookies have cooled completely, remove from pan and place on a platter or cookie sheet in a single layer. Drizzle with the chai glaze, and place in the fridge for about an hour. Once the glaze has hardened a bit, store cookies in an airtight container at room temperature.